You'll find some affiliate links within my blog posts, which means I get a small commission from anything you purchase that I recommend (at no additional cost to you). Thanks for helping to support my sewing hobby!

Well, the program is officially finished and man oh man, is there a lot to recap! It's a long one, so settle in, why dontcha? :)

Final Program Results:
The final weigh-in was last Sunday, bright and early at 8am. There was such a happy buzz in the entire group as everyone was feeling pretty fantastic about having completed the program and having some fantastic results. So, the big question, how did I do? I'm ECSTATIC over my final results. The most notable stats:

I've seen my before and after pictures and they are pretty ridiculous. I'm not going to post them here as Michelle is still getting her new site up and running, but will post a link to them when they are up.

What the numbers don't tell you is that while I have had brief moments when I've weighed less than I do now, I have never, EVER been this lean and this fit. EVER! I absolutely carry my weight in my hips/thighs/booty (hello typical pear shape) and this is an area of my body that has always caused me grief. I looked at the back of my thighs in the mirror over the weekend and gasped. Why? Because it was the first time that I have ever been happy, no, down right giddy over the state of my legs. I seriously could have sat down and cried. I had pretty much given up on ever really being content with my lower body and to have something staring back at you in the mirror that is better than your wildest imagination is pretty mind-blowing. I cannot wait for bikini season and have a drawer of several new bikinis that are just itching to get worn out and about. :) I mean, I'm even planning to wear shorts this season and I might even give a mini-skirt a whirl.

In addition to the great results on the scale and asthetically looking so much better, I've also gotten so much stronger. Two months ago, I was convinced that God just forgot to give me a tricep muscle because it didn't matter what I did in the gym, the tricep push-up was just a disaster. I attempted a full set of them (on my knees - just keeping it real) at a weights class 2 weeks ago and about fell over when I could do the first one, then the second and kept going until I completed the whole set. If it had been appropriate, I'd have gotten up and done a jig right there in the middle of class. Guess I do have a tricep muscle after all. I've also bumped up my heavy weights to 12lbs and can do a decent set of bicep curls with them. Seeing as how I started the program using 8lb weights, it's a pretty big improvement. Lastly, my cardio fitness has just gone through the roof. So much so, that I think I might start jogging this month, an activity that just never felt do-able until now.

I think women are so primed in this country to constantly nitpick at themselves, no matter what they look like, but I'm over that. I love the way I look. I love how strong I've become. I love that I am leaner and healthier now than I ever was in high school or college. I love that my husband is getting to reap the benefits of this new me!

DVD Shoot:
The next morning was the shoot for both DVD workouts - cardio strength and cardio intervals. I was pretty excited to have the later call time of 11am, so I had time to sleep in a bit, have a normal breakfast and really wake up before heading out to the studio. I got there right as the first group was starting to film for real and everyone looked so good! The energy was palpable and you could just feel that it was going to be a good day.

The few of us that were only filming cardio intervals hung out for awhile chatting, eating lunch and getting our makeup done - it was a nice relaxing start to the day. When the first shoot was complete, we all hung out together for a bit and let those that were also doing cardio intervals rest and get ready for the next shoot. By about 1:30pm, we were dressed and getting ready to rock and roll. Before we got started, we had a ton of individual and group pictures taken for promotional materials for the program and the DVD. The photographer, David Heisler, was so freaking awesome and was just a great person to have on set. I can see why he is so popular - I'd love to work with him again. Here are a few of the individual images from the day - I might be a bit of ham. Heh. :P 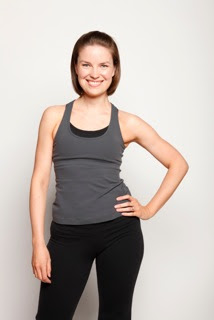 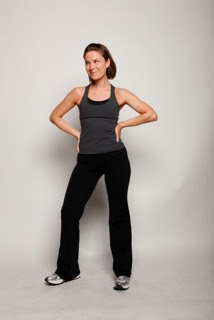 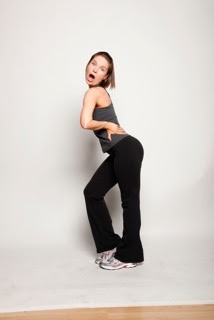 {All photos courtesy of David Heisler}
The rest of the pictures from the day are just amazing! He did a really fantastic job of capturing the high energy and fun from the day.

Around 2pm we got started with the shoot. The workout itself is about an hour, but the total filming time was about 3 hours. Surprisingly, we had very few retakes, but we did stop inbetween each section to breathe and towel off a bit. In some ways the breaks made the workout easier, but at the same time, you also lose your grove each time you stop, which makes re-starting a bit rough. It was really interesting to see what goes into a fitness dvd shoot what with the spacing and cameras and all of the other hoopla. I will say, though, it was much more relaxed and mellow than I was expecting it to be. Michelle has such a great presence on set and that really set the tone for the day. It's pretty hard to be nervous or anxious when the star of the show is relaxed and having fun.

At the end of the day, there were lots of high fives and congrats to pass around and then the majority of us headed out to a local mexican restaurant to get our grub on. Yes, we ate and no one was shy about food. It was a really nice way to end such a fun day - you know, instead of me just going home and bouncing off the walls by myself. Ha!

The dvds should be out sometime at the beginning of September, assuming editing and everything goes well. I cannot recommend these workouts enough - they're intense and high energy and you may even find yourself cussing at the television, but they are also so much fun.

So, what now? Well, I'm sure most of you won't be shocked to hear that I'm signed up for the next round of Peak 10. It's only been a week and I already really miss the workouts and the group camaraderie that is key to this program. My goal for this round is to get stronger and leaner. The scale isn't my focus this time around, but more about making my body as fit as possible - I'm gunning for those tricep pushups to be done full out and to get up to 15lb weights. And yeah, I want to hang out with my crazy workout friends some more, too. :)
Posted by amber at 9:24 AM